B. J. Harrison Reads The Hound of the Baskervilles (lydbog, zip_mp3, engelsk) 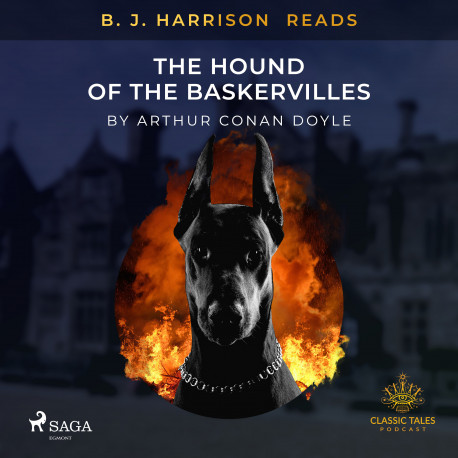 Dr. James Mortimer asks Sherlock Holmes and Dr. Watson for advice, after finding his friend Sir Baskerville dead. According to the official version, Baskerville died from a heart attack, but Mortimer thinks that something terrible happened to his friend. He believes the supernatural hound that has been chasing the Baskerville family down for many years is responsible for his death. Sherlock Holmes takes on the difficult task of solving the mystery surrounding Sir Baskerville’s death.Why are the Baskervilles being chased by the supernatural hound? Is the creature real? What exactly is the reason for Baskerville’s death? Can Holmes and Dr. Watson solve this complicated case?Find all the answers in Sir Conan Doyle’s short story "The Hound of the Baskervilles". B. J. Harrison started his Classic Tales Podcast back in 2007, wanting to breathe new life into classic stories. He masterfully plays with a wide array of voices and accents and has since then produced over 500 audiobooks. Now in collaboration with SAGA Egmont, his engaging narration of these famous classics is available to readers everywhere. Sir Arthur Ignatius Conan Doyle (1859 - 1930) was a British medical doctor and writer. He is best known for the creation of the notorious characters of Sherlock Holmes and Dr. Watson. Besides the many Holmes stories, Doyle’s work includes science and fantasy fiction, many plays, poetry, historical and non-fiction novels. He wrote his first Sherlock Holmes story at the age of twenty-seven and it was published in 1886.