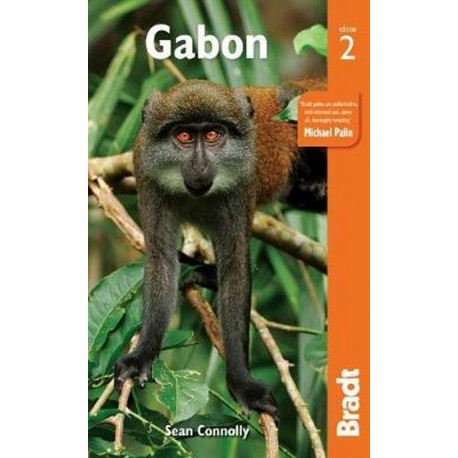 Bradt's Gabon remains the only English-language guide dedicated exclusively to what is considered by many to be 'Africa's last Eden' thanks to its sparse population and perhaps the highest percentage of forest cover of any country in the world. This new edition has been fully updated and covers all recent developments, including in the national parks. Several new maps have been added (taking the total to 31) and most sketch maps have been upgraded. Also covered is the discovery of the extraordinary orange-coloured crocodiles living in the Abanda cave system. Full background, natural history, conservation, practical and health information is accompanied by a nine-chapter regional breakdown of the country, from Libreville and L'Estuaire to Moyen Ogooue, Ngounie, Ogooue Maritime and Nyanga, as well as Woleu-Ntem, Ogooue-Ivindo, Haut Ogooue and Ogooue-Lolo. Visitors to Gabon will come face-to-face with nature in its rawest, wildest, most untouched form, from the impenetrable forests of the interior to the grassy plateaus of Haut-Ogooue and the windblown white-sand beaches of the coast - the latter known worldwide for the gorilla, buffalo, and elephant that come to wander the sandy shores and the 'surfing hippo' that - astonishingly - come to play in the frothy surf. Gabon is more than just nature, however, and culture lovers will be taken with one of the region's finest carving traditions (in both wood and soapstone), floored by the furious tempos played on the moungongo mouth-harp, and transported to another place entirely by the all-night drums, dance, fire, and faith of the traditional Bwiti rites. Bradt's Gabon offers the most thorough and up-to-date information available and is an ideal companion for wildlife enthusiasts, Africa aficionados and completists, and overlanders travelling along Africa's west coast.