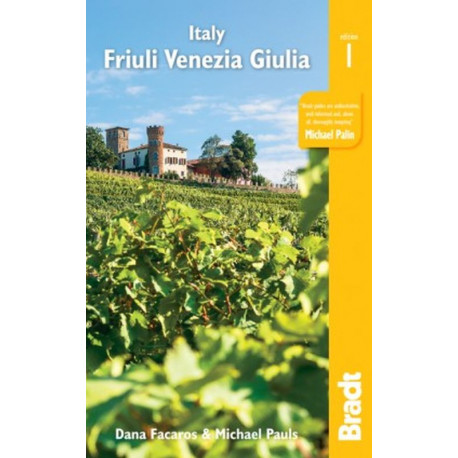 This new title continues Bradt's coverage of lesser-known but increasingly popular Italian regions and is the only guide available to Friuli Venezia Giulia, a region which forms the major part of the hinterland of Venice (but does not - despite the name - include Venice itself), and which is a convenient and fascinating place to spend time on the beach, in the Alps or relaxing In the country. It is notable also for its wines and distinctive cuisine which, with touches of neighbouring Austria and Slovenia stirred in, are starting to attract attention around the world. Written by long-time travel authors and Italy specialists Dana Facaros and Michael Pauls, background and practical information are complemented by six easy-to-follow chapters, from Trieste to the coast, Gorizia and the Borderlands, Udine, Pordenone and Western Friuli, and The Mountains: Carnia and the Julian Alps. Set in Italy's northeastern corner, Friuli Venezia Giulia is one of the most ethnically and culturally diverse parts of the country - and also one of the least known. With Bradt's Friuli Venezia Giulia, explore this small but varied region in detail, from the Alps of the north to the coastal resorts, unspoiled wetlands and lagoons, and from medieval towns like Cividale to the strange desert steppe called the Magredi and the lovely wine region of Il Collio. Discover the regional capital, caffeine-mad Trieste, where there are 67 different ways of ordering a cup of coffee, and Gorizia, one of the biggest battle fronts of World War I, which survives almost intact, with miles of trenches and fortifications open for exploration. Bradt's Friuli Venezia Giulia offers everything you need for a successful trip.