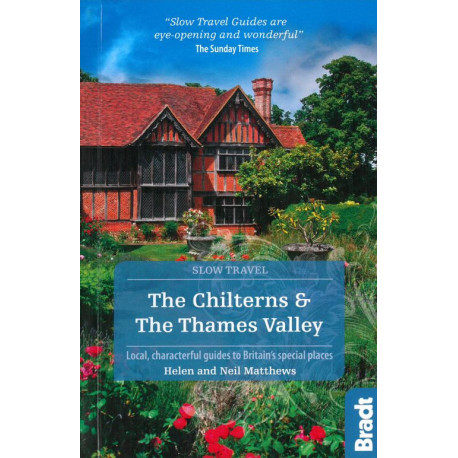 This new title from Bradt forms part of its distinctive 'Slow Travel' series and is the only title available to cover the Chilterns and Thames Valley in depth. The Chilterns and the Thames Valley do not correspond to the specific boundaries of one county or region, old or new. Bedfordshire, Berkshire, Buckinghamshire, Hertfordshire and Oxfordshire all have a share. Divided into six easily manageable sections, Bradt's The Chilterns and Thames Valley lifts the lid on what makes this area so distinctive. Chalk grasslands, beech woods, streams and wooded valleys provide a perfect landscape for walking and are easily accessible from London. About half of the area has been designated as an Area of Outstanding Natural Beauty - the closest such area to London. Rare plants such as fleawort and numerous orchid varieties, and birds including red kites, lapwings and skylark flourish. The Thames Valley follows the route of one of the world's most famous rivers. You can find key sites of monarchical and parliamentary power such as Windsor Castle and Chequers, the location of Magna Carta's sealing at Runnymede and the birthplaces of men and women who have led dissent down the ages. A host of well-loved authors has lived and written here, depicting Paradise, defining our childhoods and painting timeless images of England and its people. Eminent chefs own restaurants with national and sometimes international reputations. In short, the Chilterns and the Thames Valley together represent a wonderfully paradoxical mixture of world-famous tourist sites and lesser-known attractions full of quirkiness and character, which will repay the visitor's interest and attention many times over. From Windsor Castle to Whipsnade Zoo, Britain's oldest road - The Ridgeway - to National Trust properties such as Cliveden and Waddesdon Manor, the Henley Regatta to the Grand Union Canal, Bradt's The Chilterns and Thames Valley is the perfect companion.