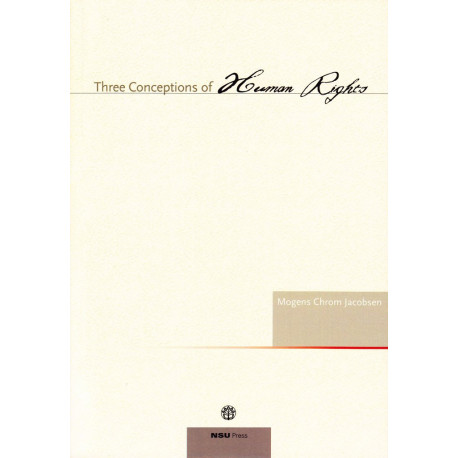 This study argues that we cannot reasonably keep on speaking as though there is only one conception of human rights. The consensus around certain core rights, though important, hides the fact that very different moral sensibilities are at work. The American and French declarations from the 18th century originate in a very different moral sensibility than the Universal Declaration of Human Rights from 1948. Their conceptions of humanity and its moral destiny are totally different. The former emphasize liberty while the latter emphasize human flourishing. The former enforces basic rules of mutual respect and leaves the rest to the individual's own choice, while the latter conceives human life as basically moral prescribing an ideal of human perfection. A third and very common ceonception today conceives human rights as a basic standard of human decency, which does not exclude other moral considerations. A basic regime of human rights leaves room for local choises in favour of liberty, human flourishing or something else, but no particular declaration seems to correspond to the view. This third view seems to be of a recent date and its theoretical foundation is such that it cannot claim any of the other declarations as its ancestors though it might be a "mutation" or misunderstanding of the classical 18th century declarations. A major part of this study traces the origin of the conception of rights behind the classical declarations, notably the Virginia declaration of 1776 and the French declaration of 1789. This conception will be contrasted with a perfectionist conception of morality, which only furnished itself with a conception of human rights very late. The third conception will be examined in the last chapter.