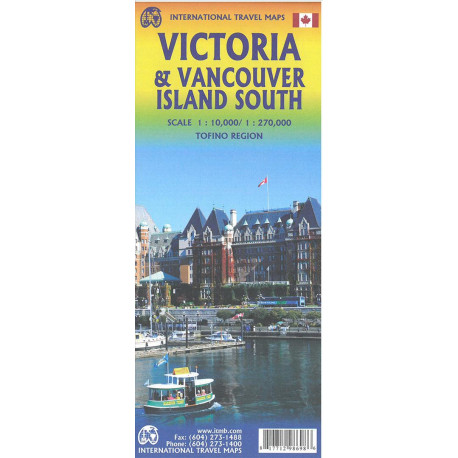 1st edition. Victoria in 1:10.000/Vancouver Island South Half in 1:270.000. Located at the southern tip of Vancouver Island, Victoria was established as the colonial capital after the Oregon Treaty of 1846 forced the British to abandon the previous capital, at Astoria, in what is now Oregon State. By western North American standards, Victoria has a long and colourful history, being settled at about the same time as San Francisco, Los Angeles, and Sacramento. After 1846, British Columbia remained a separate colony of Britain until 1971, when it agreed to join the now-established new country of Canada, based on the promise of a trans-continental railway being built to join the five provincial members. As a result, Victoria boomed, and its current charm as a touristic attraction is based largely on the growth in Victorian days. The cover picture shores the historic Empress Hotel, which is as well-known for its afternoon tea as for its dominating position on the harbour front. The provincial legislature building is close by, and is a real treat to visit, as is the nearby Royal BC Museum. Victoria is one of the great travel experiences of Canada, with daily ferries from the USA docking mere feet away from the Empress, float planes landing in the harbour hourly, and colonial architecture dominating the shopping streets. The reverse side of the sheet follows the pattern of many ITMB maps. It is a detailed map of the southern half of Vancouver Island, ideal for day trips from Victoria. It includes beautiful Butchart Gardens, a botanical wonderland, an inset of Tofino’s wonderful nine-mile beach, Cathedral Grove (which is the world’s largest gathering of old-growth fir trees), Chemanus (with its painted buildings), Duncan (with its logging museum), and Nanaimo. The famous West Coast Trail is shown, as are the Broken Islands. Finally the ferry routes to Vancouver and to the Gulf Islands are shown.