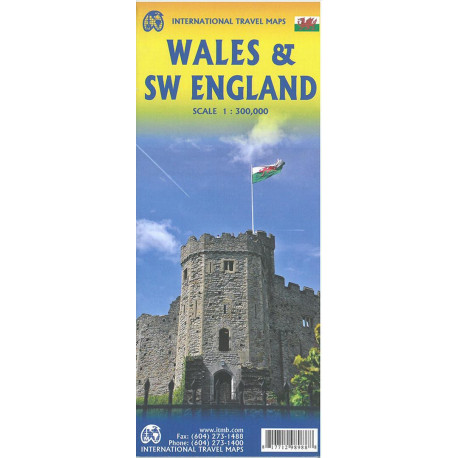 1st edition 2017. This map is double-sided, with Wales on one side and the West Country (southwest England) graces the other side. Excellent coverage of Cornwall, Devon, and Somerset is provided, along with a fair portion of Dorset and Wiltshire. The eastern extreme of the map is Salisbury/Swindon, so a lot of ground is still being covered. The peculiar way that motorways are designated means that ‘true’ motorways are shown in blue while equally good non-motorways are in green casing, with not a tinker’s difference between them. My own favorite place is Mousehole, on Mount’s Bay; Tintagel ranks a close second. The map is loaded with touristic attractions; both well-known and more local. For something really unusual, visit Hay-on-Wye, west of Hereford. It is actually in England, smack on the border, and its claim to fame is that it is the world’s largest concentration of bookstores – an amazing place! This was obviously a fun map to make, as it includes so many ‘favorite’ places. This map will be invaluable for anyone visiting Wales! Scale 1:300.000.