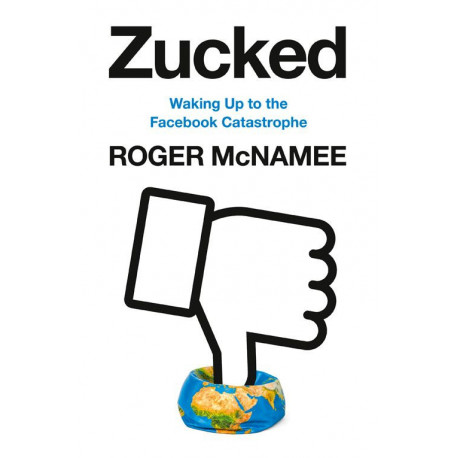 Zucked: Waking Up to the Facebook Catastrophe (Bog, Paperback, Engelsk)

If you had told Roger McNamee three years ago that he would soon be devoting himself to stopping Facebook from destroying democracy, he would have howled with laughter! This is the dramatic story of how a noted tech venture capitalist, an early mentor to Mark Zuckerberg and investor in his company, woke up to the serious damage Facebook was doing to our society and set out to try to stop it. Zucked is McNamee's intimate reckoning with the catastrophic failure of the head of one of the world's most powerful companies to face up to the damage he is doing. It's a story that begins with the author's dawning realization that the platform is being manipulated. Then there is the even more unsettling realization that Zuckerberg and Sheryl Sandberg are unable or unwilling to share his concerns. And then comes Brexit and the election of Donald Trump, and the emergence of one horrific piece of news after another about the malign ends to which the Facebook platform has been put. To McNamee's shock, Facebook's leaders still duck and dissemble, viewing the matter as a public relations problem. Now thoroughly alienated, McNamee digs into the issue, and fortuitously meets up with some fellow travellers who share his concerns, and help him sharpen its focus. Soon he and a dream team of Silicon Valley technologists are charging into the fray, to raise consciousness about the existential threat of Facebook, and the persuasion architecture of the attention economy more broadly - to our public health and to our political order. Zucked is both an enthralling personal narrative and a masterful explication of the forces that have conspired to place us all on the horns of this dilemma. This is the story of a company and its leadership, but it's also a larger tale of a business sector unmoored from normal constraints, at a moment of political and cultural crisis. This is a wise, hard-hitting, and urgently necessary account that crystallizes the issue definitively for the rest of us.