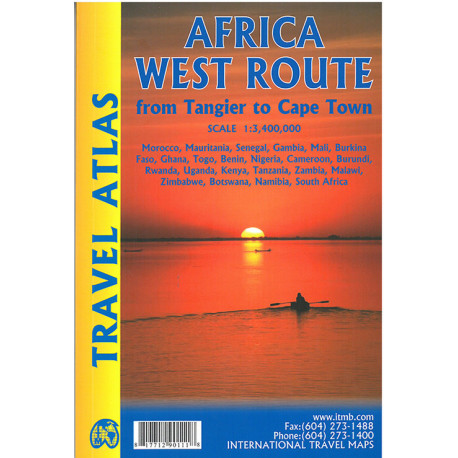 This is an atlas of a practical route to follow, via Tangier, Morocco, Mauritania, Senegal, Gambia, Mali and Ghana, through the Congo to Uganda, and then south over a variety of options to Namibia and South Africa. The scale is 1:3,4 mio.The advantage of this route is that it avoids the conflict-ridden countries closest to infection from the extremist Islam movement. It also avoids the current difficulties of the central route through Algeria (the Hoggar route) and Niger. We do have to caution that all routes through Africa contain risks. Routes are not well-developed and are subject to disruption; also, by the nature of extremist Islam, those countries with a sizeable Muslim population tend to be under threat, although at this time the route should be considered safer than the other two routes. Crossing the Sahara is challenging, due to shifting sand dunes, but the new coastal highway through Morocco and Mauritania makes reaching Senegal much easier than previously. Crossing the Congo also remains a challenge, due to poor infrastructure, but once one reaches Uganda several options are available for southward travel. We have chosen to ignore Angola for now, due to lack of knowledge of travel conditions in that country, but we know of no reason for travellers to avoid that country. In addition to providing route maps through all the countries involved (shown on the back cover of the book), 43 full-page maps of cities along the route are included, such as Casablanca, Nouakchott, Banjul, Bobo Diolasso, Lome, Douala, Kigali, Abuja, Livingstone and other cities never before included in a travel atlas of Africa. This atlas includes: Roads by classification, UNESCO World Heritage, National Parks, Hotels, Point of interest, Airports, Tourist information, Hospitals, Shopping centre, Lake, River, Golf course, museums, and much more.