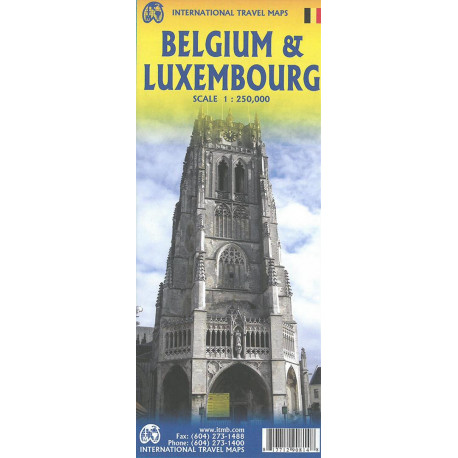 Belgium consists of two nation states, the Belge (speaking French) and the Flems (speaking Flemish). The two nations co-exist without particularly liking each other, but both agree that Belgium is one of the nicest countries in Europe. Luxembourg gets tacked on to this map simply because it is nestled into a corner of Belgium and the map would look funny if it were omitted. The Lux (I'll bet no one calls them that!) are much more 'French' in their speech and customs. I like both countries. Belgium has marvelous historic sites, such as the central market square of Brussels, the historic university town of Leuven, and the grand cathedral at Liege (called, with typical European craziness, Luttich ten kilometers to the east and Luik ten kilometers to the west). The map is divided into west half (coast to Leuven and 1st edition 2016. Breda south to Charleroi) and east half (Brussels to Aachen and Eindhoven south to the French border with Luxembourg. Considering the small size of the entities being mapped, we were able to provide a lot of road information as well as town names, parks, camping areas, even some hotels outside of major urban areas and, of course, places of touristic interest. Luxembourg is more hilly and the Ardennes are a treat to drive through. Bastogne has a major museum dedicated to the WW2 Battle of the Bulge.