Dear Zoe Ukhona: How we survived years of fertility treatments and the adoption process to finally hold you in our arms (Bog, Hæftet, Engelsk) 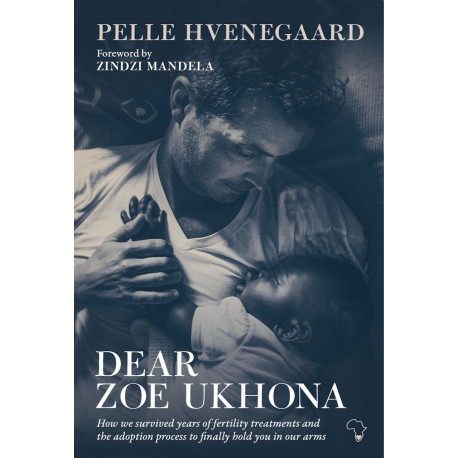 When one summer evening, on a blind date that is almost cancelled, Pelle Hvenegaard meets Caroline, he knows right away: This woman will be the mother to his children. Their first meeting grows into a blazing romance, and it is quickly clear that the two of them want to have a family together – but biology toys with them.

Dear Zoe Ukhona is Pelle Hvenegaard’s honest, comic, tragic and heartwarming tale of the six-year fertility and adoption hell he and his partner had to go through before they could open the door to their apartment in Copenhagen with little Zoe Ukhona in their arms.

We follow Caroline and Pelle’s arduous inner journey, but we are also with them when – to keep themselves going – they travel to five continents before climbing to the top of Kilimanjaro to call out to their coming child, unaware that she had in fact been born just twenty days earlier in South Africa.

This is a story of love and of dealing with life when it doesn’t go the way you planned. A story about searching for happiness and meaning – and the joy of finding them both.

PELLE HVENEGAARD became world famous as a twelve-year-old when he played the lead role in Bille August’s Oscar-winning film Pelle the Conqueror. He has a degree in journalism and has worked in the TV industry for many years.