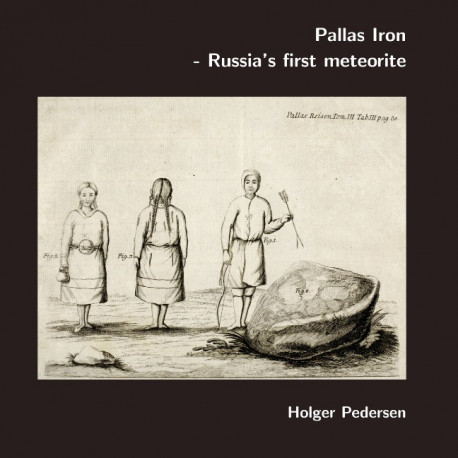 Almost 700 kilograms of the finest iron, mixed with transparent, beautiful crystals!
This was the rare and unexpected discovery made in 1771 near the river Jenisei, central Siberia.
The German naturalist Peter Simon Pallas - then wintering in the town Krasnoyarsk - was convinced that the mass was a 'product of Nature', and not a leftover from ancient miner's simple kilns. He quickly reported his find to the scientific world, and sent pieces around, which he had chopped off.
While the mass is now officially named 'Krasnojarsk', it is often referred to as 'Pallas Iron', or, in Russian 'Pallasovo Zheleso'. It took years of intense debate, however, before its origin in interplanetary space was firmly concluded. In honor of the discoverer, the specific type of meteorite is now known as 'pallasite'.
Holger Pedersen has studied the old reports, and found hints that other fragments were found nearby. From comparison to a Chilean meteorite of the same type, Imilac, he concludes that these fragments were scattered when a second, large piece of the Krasnojarsk meteoroid hit ground. This conclusion is supported by the morphology of numerous museum-samples, which lack marks from the pounding by hammer and chisel.
Among some facts revealed by papers in the archive of the Russian Academy of Sciences (St. Petersburg) is the identity of the scout, who brought the first tiny sample to Pallas' attention; this name is here revealed for the first time. Also, it can be concluded that Pallas' original illustration, which shows the meteorite at the foot of a male Samoyede, was made using a 'camera obscura'.