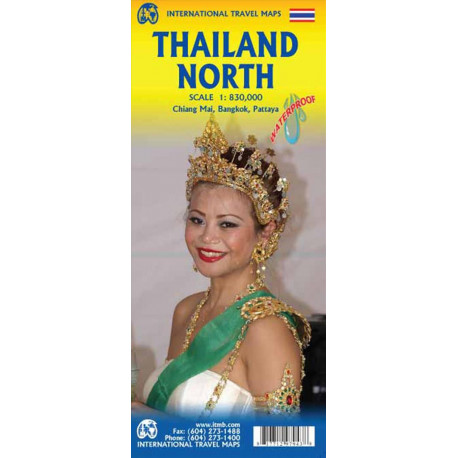 1st edition 2017. Scale: 1:830.000. The map actually goes from Bangkok north, and side one includes a very good inset map of Bangkok's central area. The most interesting spot on this side is the town of Kanchanaburi, which is within easy striking distance of Bangkok. This was the site made famous by the war movie Bridge on the River Kwai (now Khwae) on the Japanese-built Burma Railway. The current bridge is not the original, but the Commonwealth Graves Cemetery is well worth a visit. The other side concentrates on the wilder portion of Thailand, the far north. All known points of interest have been included, including a lovely inset map of Chiang Mai, the focal point of the north. The rail line ends here, but if the city's many temples and pagodas don't overwhelm you, tours to nearby temple sites abound. The temple complex near Phrae, further to the east, are also shown, as is the highway leading to Chiang Rai in the far north.