Twilight of Democracy: The Failure of Politics and the Parting of Friends (Bog, Indbundet, Engelsk) 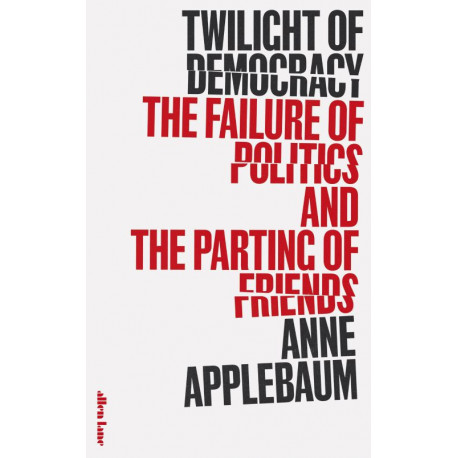 From the Pulitzer prize-winning author of Gulag: A History. - 'Anne Applebaum is a leading historian of communism and a penetrating investigator of contemporary politics. Here she sets her sights on the big question, one with which she herself has been deeply engaged in both Europe and America: how did our democracy go wrong? This extraordinary document, written with urgency, intelligence and understanding, is her answer,' Timothy Snyder. 'In this, her most personal book, a great historian explains why so many of those who won the battles for democracy or have spent their lives proclaiming its values are now succumbing to liars, thugs and crooks. Analysis, reportage and memoir, Twilight of Democracy fearlessly tells the shameful story of a political generation gone bad,' David Frum. - In the years just before and after the fall of the Berlin Wall, people from across the political spectrum in Europe and America celebrated a great achievement, felt a common purpose and, very often, forged personal friendships. Yet over the following decades the euphoria evaporated, the common purpose and centre ground gradually disappeared, extremism rose once more and eventually - as this book compellingly relates - the relationships soured too. Anne Applebaum traces this history in an unfamiliar way, looking at the trajectories of individuals caught up in the public events of the last three decades. When politics becomes polarized, which side do you back? If you are a journalist, an intellectual, a civic leader, how do you deal with the re-emergence of authoritarian or nationalist ideas in your country? When your leaders appropriate history, or pedal conspiracies, or eviscerate the media and the judiciary, do you go along with it? Twilight of Democracy is an essay that combines the personal and the political in an original way and brings a fresh understanding to the dynamics of public life in Europe and America, both now and in the recent past.