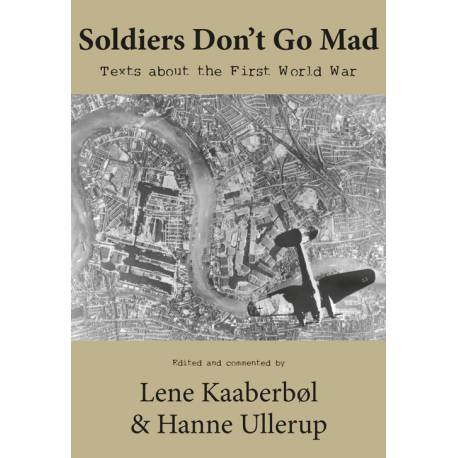 Til brug i engelskundervisningen: ‘Soldiers Don’t Go Mad’, makes it possible to study The Great War from a great variety of literary angles, and at levels from the intermediate to the most advanced.

In the course of four years, the British Empire sent almost 9 million of its young men into the mud and horror of the First World War. Nearly a million died.

Why did they go? How did they deal with the unexpected realities of the first full-scale industrialized war? Why did shellshocked become an important new word in the English language? What roles are assigned to the women behind the lines? How could the gap between the Home Front and the real frontline be bridged? Why did a war-torn Britain make a cult of male comradeship while at the same time punishing male homosexuality as a criminal offense? Why did the English Parliament in 1998 consider posthumous pardons for the 303 World War I soldiers who were shot at dawn for cowardice and desertion – and why was this pardon not given?

These questions are among those addressed by the poetry, short stories, essays, newspaper articles and novel excerpts of this anthology. The focus, of course, is on the time of the Great War; but texts ranging from the famous Agincourt speech by Shakespeare’s ‘Henry V’ to modern day editorials provide background and perspective.

Recruiting posters, paintings and photographs add to the portrait of a society ravaged by a war without precedent. For students and teachers, exercises and a full Danish glossary offer help and inspiration, with a special section devoted to reading suggestions for Pat Barkers WWI novel ‘Regeneration’.

All in all, ‘Soldiers Don’t Go Mad’, makes it possible to study The Great War from a great variety of literary angles, and at levels from the intermediate to the most advanced.