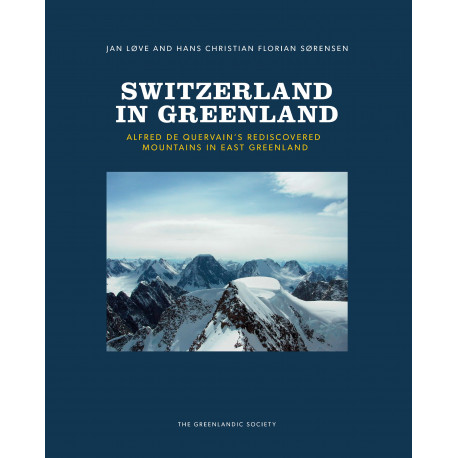 Swiss Alfred de Quervain and his three colleagues were the first ones to cross the mid Greenland Ice Sheet by dog sledge from a glacier north of Jakobshavn/Ilulissat in the direction of Ammassalik/Tasiilaq in 1912.
As they approached the East Coast, they noted a completely unknown mountain range. According to their maps only crevasses in the Ice Sheet’s border zone were to be seen.
The mountain area was given the name Schweizerland, and they drew a panorama of the mountain landscape from a distance of more than 100 km. They named 26 sites, but they could not site them on a map – there was none.
The book also includes observations and data from the area noted by subsequent expeditions, and it has been possible to rediscover Alfred de Quervain’s mountains and plot them on a map by means of modern maps and observations made by the authors during their visits to the area.
Based on the authors’ work, the Greenlandic Place Name Committee, Nunat Aqqinik Aalajangiisartut, has decided to authorize the majority of Alfred de Quervain’s names.
The book is for all those interested in exploring Greenland and its history and geo­graphy, but also for alpinists and those interested in place name etymology.