The War of the Worlds (ebog, epub, engelsk) 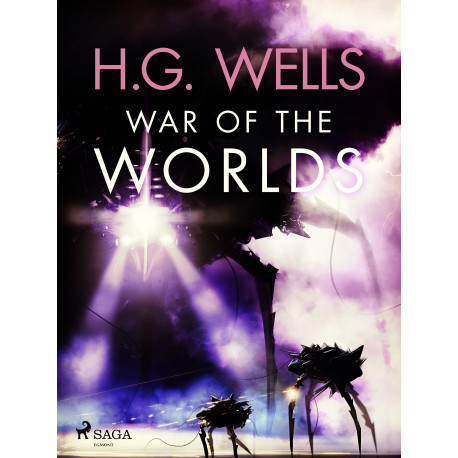 ‘The War of the Worlds’ is H. G. Wells’ most popular novel and is celebrated as one of the most influential and greatest science-fiction stories ever. Its popularity stems largely from the fact that it is one of the earliest stories dealing with an alien invasion on Earth. An army of Martians lands in England and their three-legged robots wreak havoc and destruction upon the unsuspecting civilians. The protagonist is separated from his wife during the onslaught and must defeat the invaders and find his wife. This thrilling novel features non-stop action from the start as the protagonist must journey through a nightmarish world in which aliens are not the only monsters. The novel remains timeless due to its critique of imperialism and its belief that civilisation will turn to other planets once their native resources have been plundered. Well’s vivid and terrifying imagery caused widespread panic when ‘The War of the Worlds’ was broadcast as a radio play in 1938 as people believed the invasion was real. The novel spawned an Academy Award-nominated movie adaptation directed by Steven Spielberg and starring Tom Cruise in 2005. It is clear to see why ‘The War of the Worlds’ remains influential as it is the definition of a page-turner and should be read by fans of authors such as George Orwell or Frank Herbert. H. G. Wells (1866-1946) was a celebrated English writer, remembered mostly for his science fiction works. Often described as a futurist, H. G. Wells’ influence cannot be overstated for his works foresaw many technological innovations such as space travel, the atomic bomb, and the Internet. A four-time Nobel Prize in Literature nominee, Wells explored a wide array of themes in his works, from religion to social criticism and beyond. Some of his best works include the time-travel novel ‘The Time Machine’, the sci-fi adventure novel ‘The Island of Dr. Moreau’, and the mankind-versus-aliens novel ‘The War of the Worlds’. Wells occupies one of the central seats in the canon of science-fiction literature and his writing inspired other celebrated authors such as Ray Bradbury and Philip K. Dick. Wells’ stories are still widely read to this day and have had numerous cinematic adaptations including ‘The Invisible Man’ starring Elisabeth Moss.