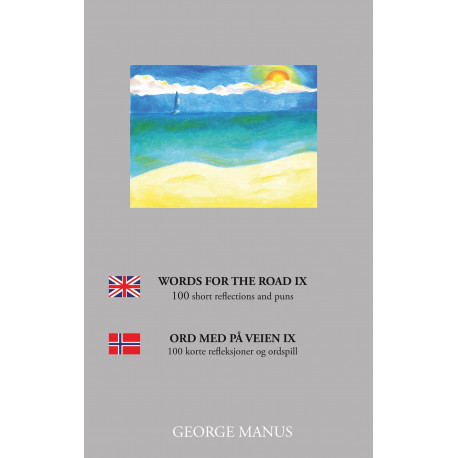 With this "WORDS FOR THE ROAD IX", the ninth in the series since the first was published in 2018, I have left behind 1000 "Short reflections and puns" in both English and Norwegian. I have dedicated the book to "The Will" which I see as an important ingredient in reaching a goal. In the reflection "The Will", which you can read from page 14, I write: "If one is to reach a goal one has set for oneself, of whatever character, the will must be there.

It´s not at all so that if only the will is there one automatically reaches all goals one has set for oneself. The will is only one of the ingredients needed to do so, but Maybe the one that at the end of the day is the condition needed to put one´s thoughts and meanings forward". Most of the content in the book was first written in Norwegian and then translated into English, so I ask the reader to be overbearing about the English presentation, which often does not get quite the same rhythm and meaning as the Norwegian.

As in the previous eight "WORDS FOR THE ROAD", the table of contents is presented in alphabetical order in both English and Norwegian. In the book the English comes first, with the corresponding Norwegian next to it.

If you feel that you have heard any of them before, I guarantee that it has never been my intention to plagiarize.