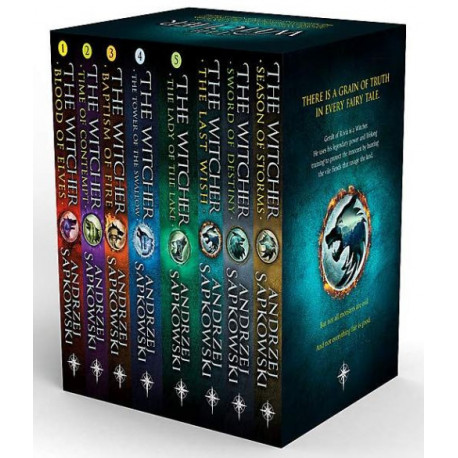 Meet Geralt of Rivia - the Witcher - who holds the line against the monsters plaguing humanity in the bestselling series that inspired the Witcher video games and a major Netflix show. The Witcher's magic powers and lifelong training have made him a brilliant fighter and a merciless assassin. Yet he is no ordinary killer: he hunts the vile fiends that ravage the land and attack the innocent. But not everything monstrous-looking is evil; not everything fair is good . . . and in every fairy tale there is a grain of truth. Andrzej Sapkowski, winner of the World Fantasy Lifetime Achievement award, started an international phenomenon with his Witcher series. This boxed set contains all eight books: The Last Wish, Sword of Destiny, Blood of Elves, Time of Contempt, Baptism of Fire, The Tower of The Swallow, The Lady of the Lake, Season of Storms.